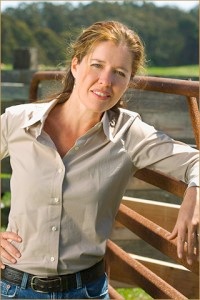 The list of Meatless Monday supporters continues to grow across the globe, and surprisingly to some, many of the latest enthusiasts make their living either cooking meat, such as chef Mario Batali or producing it, like rancher Nicolette Hahn Niman. What makes Meatless Monday so successful is its simple and inclusive message which promotes moderation with the goal of improving public health and the health of the planet.

Nicolette and her husband Bill run the BN Ranch in Northern California near the seaside raising heritage turkeys and beef cattle on pasture. Bill knows a thing or two about ranching. He founded the famous Niman Ranch Inc. known for its sustainable and humanely raised meats. Nicolette is a Renaissance woman of sorts—new mom, writer, environmental lawyer, and interestingly, a vegetarian.

I recently was able to catch Nicolette for a few minutes by phone to ask her why she and Bill support Meatless Monday. She made it clear that she didn’t have much time; she was in the midst of a writing project, running the ranch (Bill was traveling) and taking care of her 14-month-old son who I could hear in the background chatting and occasionally clinking the keys of their piano. Knowing that time was short; I got straight to the point:

RL: A lot of people mistakenly believe that the Meatless Monday campaign is promoting the demise of all meat production, while it has always maintained that its message is simply one of moderation and inclusion of omnivores and vegetarians alike. As a rancher yourself, what would you say to any farmer who is threatened by the MM campaign?

NHN: Bill and I are very supportive of the Meatless Monday campaign and here’s why: We think that to really improve the way food is being produced and the way people are eating in this country people should eat less meat but eat better meat. All food from animals—meat, dairy, fish, eggs—should be treated as something special. Anyone who is raising food animals in the traditional healthy way, without relying on industrial methods, drugs and chemicals, is someone who will benefit from people embracing that approach. We think the Meatless Monday campaign is part of a shift in attitudes about meat, towards something that is precious not something that is consumed without thought or in enormous quantities.

RL: You just wrote an interesting piece in the Atlantic entitled “Can Meat Eaters Also Be Environmentalists?” Well, can they?

NHN: Yes, definitely. The idea that it is a contradiction to be a meat eater and an environmentalist is just a misunderstanding of the most ecologically sound food production systems, which, in my view, definitely involve animals. There has been a lot of media attention to the idea that meat [production] is environmentally damaging. That’s because of bad practices that are rampant and widespread, such as total confinement systems with liquefied manure, use of hormones, feeding of antibiotics. The evidence is now irrefutable that these practices endanger the environment and public health. I’ve spent most of the last 10 years highlighting those problems to the public. But that is totally different than saying that raising farm animals is inherently environmentally damaging, which just isn’t true. I’ve been doing a lot of research into the role that animals play in rebuilding soils, and how grazing pastures are far better than any other agricultural land use in terms of erosion and in carbon sequestration. One thing I’ve become convinced of is that the best farming mimics nature, and natural ecosystems are all built on the relationships of sunshine, water, plants, and animals. So, I would say that actually the most environmentally sound diet includes some meat, dairy, and eggs.

RL: Is it important to point out that the majority of the meat products people eat in America are produced on industrial farms? Would you agree with that?

NHN: Much of the meat—most, actually—that is being produced and consumed in the United States today is being produced in environmentally damaging ways. I do not endorse any of those systems. In fact, I explicitly and strongly oppose them. That’s totally different than the fundamental question of whether or not meat is environmentally damaging per se and people are confusing those issues all over the place.

RL: Back in November you posted a must-read eater’s guide on how to avoid industrially produced foods in the Huffington Post. Could you give us a few quick pointers or the most important things you would tell people?

NHN: Yes. It was a long article, and hard to summarize in just a few words. But I’d say the most important thing is to try to just get closer to the source of your food, try to learn how and where your food was produced. The easiest ways to do that are to try to buy directly from farmers through farmers’ markets, community supported agriculture programs [CSAs], farm stands, and any place where you can get food directly from a farmer. Even in those places, I still encourage people to talk with the farmer about how the food is being produced, not to assume that it’s being raised in the way that you want it to be. Recently I’ve been saying, “I try to get all my food from a place I’d enjoy visiting.” That kind of sums up my approach. I also think that growing some of your own food is a great way to get out of the industrial system. So, people can have a vegetable garden, even if they just have a terrace or a fire escape where they can have a flowerpot with some tomatoes and some herbs. You know, just starting to do a little bit. And if you have a yard why not have a garden, maybe have a flock of egg-laying hens? I think it makes a big difference to just start taking baby-steps away from the industrial food system. Anything to get involved with how your food is produced. Eating is something that most of us tend to do without much thought. The more you start paying attention to it you realize it’s something worth investing time in. Building delicious, healthy meals ends up being something that is incredibly rewarding and not a chore.

RL: What is your advice to people who would rather not eat industrially produced foods but are limited either by higher costs or easy access?

NHN: Well, that is challenging because the whole industrial model has been successful at creating food that is cheap in terms of its cost at the grocery checkout. But our food is also cheap in the other sense of the word, in that it’s lacking in quality; these days it’s less nutritious, less safe, and less healthful than ever before. Generally one does pay more for food that is raised on traditional and/or organic farms. Here again, raising some of your own food to the extent possible is one way to eat good food affordably. Also, doing more of your own cooking and baking as opposed to buying prepared foods helps make good food affordable, because whole ingredients tend to be cheaper than prepared foods. And then some tricks for [saving money on] vegetables and fruits especially [includes] eating things when they are in season. In the season of abundance the cost tends to go down. You especially notice that when you are buying directly from farmers, because in the season of plenty they usually have more than they can handle and the prices are lower. When you are talking about things like meat, learning how to use some of the less popular cuts, cuts that are no less flavorful or nutritious, is a great way to save some money. My husband, Bill, who really knows meat, always talks about that. He says that some of the tastiest and most nutritious cuts of meat are some of the most underappreciated. They are often a lot cheaper.

RL: You’ve gained quite of bit of praise for your book, “Righteous Porkchop, Finding A Life And Good Food Beyond Factory Farms.” Michael Pollan is quoted as saying your book is, “A searing, and utterly convincing, indictment of modern meat production. But the book brims with hope, too, and charts a practical (and even beautiful) path out of the jungle.” You couldn’t have paid for a better endorsement. Instead of focusing on the indictment part, could you tell me more about the hope that he mentioned?

NHN: Yes, I like focusing on the hope, too. A lot of my book is about farmers that are doing things the right way from the standpoint of the environment, animal welfare, and human health. I firmly believe that it’s a myth that this country cannot feed itself with traditional, non-industrialized farming. A lot of my book is dedicated to disproving that myth and proving that traditional, sustainable farms are economically viable. And I just tell the stories and describe what a lot of those farmers are doing, as well as presenting the economic data to show that it’s an economically viable system. But I think it is really important to keep in mind that our country is heavily subsidizing with public dollars the current form of industrial agriculture. If we really want a sustainable healthful food system we need to take the dollars that we are putting into agriculture and shift it towards good methods. I support the use of public funds for agriculture, but I don’t understand why we’re not putting it towards a food system that is environmentally benign and producing healthy food.